In the January issue of the Boat US Marine Insurance Magazine I have written an article on how to inspect your rigging. I did this because a lot of us sailboat owners are in areas where it is difficult to locate a rigger to do inspections for us. We as sailboat owners need to be able to keep an eye on our rigging. You can read the article online at: Seaworthy

Here are some photos of what to keep an eye out for.

Look closely for the cracks in the stainless steel. 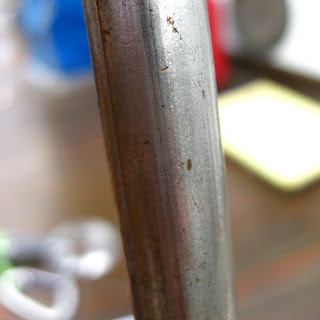 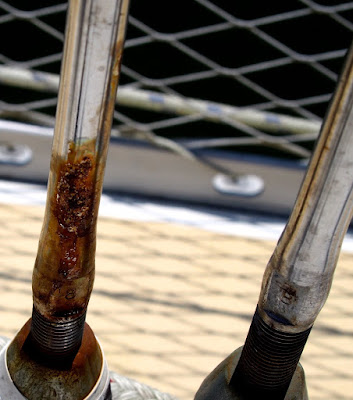 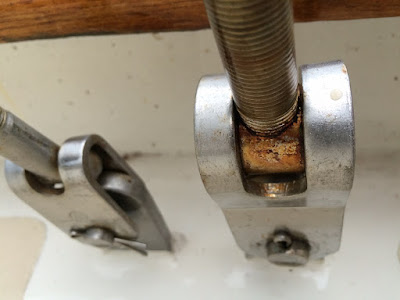 As my work continues to involve more thermal imaging and ultrasound inspections, I have started a new website to provide information on these services. ndtyacht.com 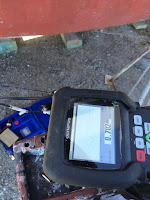 The goal at NDT YACHT is to solve problems using non destructive testing while working with boat owners, builders, boatyards, and insurance companies. 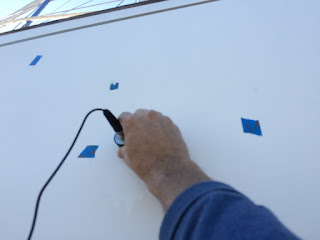 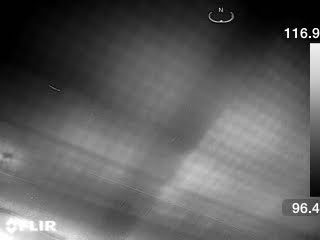 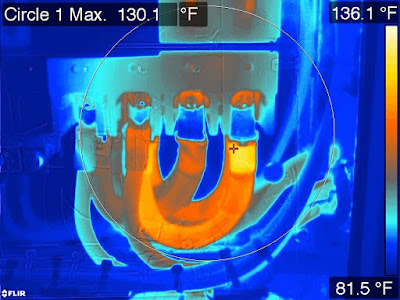 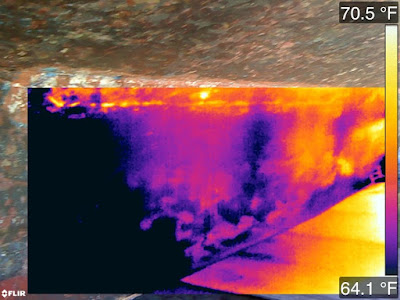 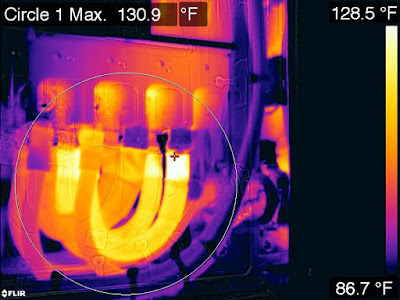 Posted by Unknown at 7:33 AM No comments: 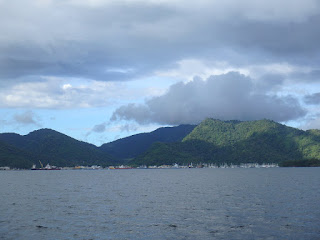 On a recent trip to Trinidad for a survey I was pleasantly surprised with the services available for the boat owner there. This is not the Caribbean Island you might be used to. You will not find an island crowded with tourists or your typical anchorages. In Chaguaramas you will find an assortment of boat yards and chandleries. My survey was at Peake Yacht Services where I found the staff to be very helpful. This yard is capable of repairs on any type of yacht. If you find yourself in Trinidad make sure you hire Jesse James as your taxi driver. Jesse is a true friend to the cruiser and he and his drivers will take good care of you.http://www.membersonlymaxitaxi.com/about.htm 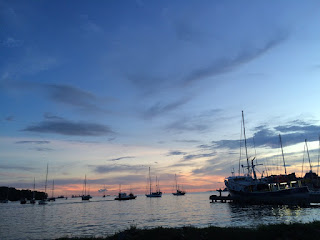 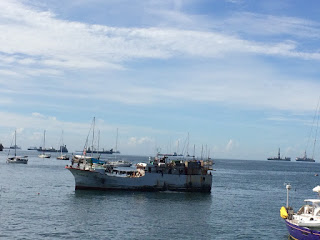 Once again I am happy to announce I will be part of the boat buyer's program at Trawler Fest in Rivera Beach, FL. http://www.passagemaker.com/events/trawlerfest-riviera-beach-2016/

I am looking forward to teaming up with yacht designer Stephen Seaton  on a seminar about buying and building custom yachts. We will cover what you will need to know about having a custom boat designed and built. We will also cover the purchasing of a used custom boat, most of which are one off built boats. We will mostly cover metal which is the most common in custom built trawler materials, but will also touch on wood and fiberglass.
Posted by Unknown at 2:18 PM 2 comments:

I will be giving two talks at IBEX (International Boatbuilders' Exhibition & Conference) this year. I get to discuss my two favorite boat building materials wood (yes wood), and aluminum. The first session (205) is on using Thermal Imaging in planning repairs to wood and wood composite boats. I will be addressing how Thermal Imaging is used in the survey process and then the repair process. PJ Rodgers, service manager of Huckins will be joining me to give insight on how repairs are performed based on the findings of Thermal Imaging.

IR Image of a wood hull.
The second session (504) I will be teaming up with my father, boat builder Howdy Bailey, to discuss aluminum boat building. Some of the topics we will be covering are; frame assembly, plating, weld prep, and prepping the hull for paint.

Howdy Bailey built aluminum cutter.
http://network.ibexshow.com/IBEX2015/Public/Sessions.aspx?SuperTrackId=&TrackId=&AssociationId=&DateId=&FormatId=1&DurationId=&SpeakerId=&AbilityLevelId=&SessionTypeId=&SubExpoId=&Keyword=&&SearchEvent=&View=Sessions
Posted by Unknown at 10:06 AM No comments:

Once again I will be part of THE BOAT BUYERS SURVIVAL GUIDE at Trawler Fest-Bay Bridge. I really enjoyed  participating in the one at Trawler Fest Anacortes. I will also be teaming up with Yacht Designer Chuck Neville on the session: AN INTRODUCTION TO METAL BOATS

http://www.passagemaker.com/events/trawlerfest-baltimore-2015/
Posted by Unknown at 8:13 AM No comments:

This Summer I had a chance to interview Yacht Designer George Buehler. I hope you enjoy, Dylan Bailey

George Buehler has been designing boats out of wood and metal for over 20 years. Some of his most popular designs have been his Diesel Duck designs. In this issue of the MBQ we feature his latest the 41.2 as well ask him some questions about his career. George has also released new additions of his books Trollor Yachts and Back Yard Boat Building. You can visit his webs sites at: http://www.georgebuehler.com/ and http://dieselducks.com/

D.B. George, when did you get into boating?
G.B- In Jr. High School when I built an 8’ hydro which I rolled on the first run.  My mother made me trade it for an El Toro sailboat, which got me into sailing….

You worked for Boat Builder Paul Luke for a while, tell us about your experience there.
- What I remember best is the amazement I STILL feel of being around such a phenomenal skill level group of carpenters.  Luke’s was great, but before that I swept floor and butchered wood at Goudy & Stevens during the building of the 110’ schooner AMERICA recreation.  Double sawn frames, double planked, SIX MONTHS from start to finish.  The skill level of those old wood yards was amazing.

You built a boat and cruising, tell us about that experience.
- I built a self designed 26’ double ender while working a near minimum wage job as a night shift orderly on the “disturbed” ward (NEVER show fear and you’ll live) in an Oakland CA public hospital.  I had no money so used lumberyard materials, no engine, tree mast, polypropylene running rigging, and had maybe the best two years of my life cruising it to Mexico and Hawaii, with absolutely no problems.

When did you realize you wanted to design boats for a living and how did you become a yacht designer?
- I fell into it.  After selling the 26 in Hawaii, I came to Seattle to build a 36 I designed while sailing to Hawaii.  Various people came by and wanted plans for a bigger version and a smaller version, and before I knew it I was selling yacht designs.  I never planned on doing it for a living and still haven’t decided what I want to do if I ever grow up.

Could you tell us about your first commission or design?
- The 26 footer mentioned above.  I was my own first client

What was your first design in metal?
- I really don’t remember.  People were building my wood designs in metal on their own long before I drew metal construction plans.  I think my first serious metal commission was the 38’ Diesel Duck for the Blackshaws, back in the 1990s.

Your Diesel Duck series of designs have become very popular. What was the inspiration for the design?
-West coast workboats and keeping an awareness of simplicity of assembly. 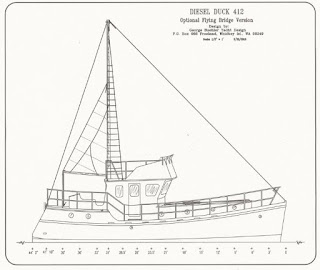 Do you have any recommendations for the amateur builder looking at your designs and wanting to build their own boat?
-Nope.  I don’t try to talk anybody into anything.  See what’s out there and make up your own mind what you want.  I do offer good support, but others probably do too.

Do you have any recommendations for anyone wanting to modify a design of an existing boat?
- Nope  While some designers act as though Jesus Christo himself was guiding them, the fact is most just draw what they like.  So if you want to make a change go for it.  But if it floats upside down it’s on you.

In this issue of MBQ we feature your latest Diesel Duck design.  Is there anything on the drawing board you want to tell us about?


- I just got a commission for an 80 foot “Duck like” boat we’re gonna call SUPER Duck 80.  I have no idea yet what it will look like.  It’s gonna take a few cocktail hours to rough out the ideas.  It’s exciting to think about though. 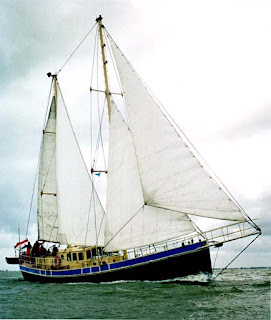 IR image of my steel boat 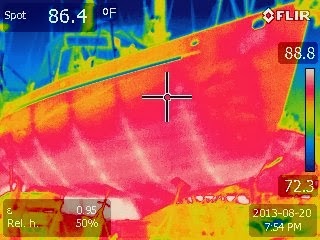